I am a 45-year-old mom to two young children, ages 4 and 8. Most mothers with children the same ages as mine seem to be twenty years my junior which, as you can imagine, makes me feel old and decrepit by comparison. The thing is, though, that aside from lacking the youthful looks and vigor of my parenting peers, I do feel more confident . . . and not just as a parent, but also as a person and as a poet.

While I long for the body I had twenty years ago, I would not want to lose the life experience that has delivered me of so many different types of neuroticism, particularly those associated with my writing. Heck, I only just recently (in the past few years) started sending my work out for publication, despite the fact that I have been writing for forever (well, at least since before my family owned a microwave oven or a television remote control).

Having waited so long to have children has made me a better parent, and I like to imagine that the delay in getting published will make me a better writer. Doubt still creeps in, as it does for every writer, but now that I expect doubt to wheedle its way in, I am already on standby, armed with a flyswatter, ready to whack that annoying little critter: It won’t be landing on my cupcake today. But, if I were to be completely honest, I have thrown away a lot of cake after been divebombed by some rotten flies.

It’s funny . . . sometimes, I think I’m getting what I’m owed – you know, Karma, and all that. I think back on all the rejections I handed out to doting boys (back when I had the youth and vigor mentioned previously): “It’s not you, it’s me!” That sounds just like the rejection letters I get these days: “Unfortunately, we won’t be publishing your work. But don’t worry, it’s only because your poems do not fit our overarching theme or our editorial constraints: It’s not because we think they’re a load of old crap.” Well, that’s not exactly what they say, but the whole “it’s not you, it’s us” is very much the idea. I think I owe a couple of potential suitors from the past an apology.

Despite the rejection letters though, I have managed to break new ground: I am no longer afraid to tell people I am a poet (regardless of publication status). I own it now. Poetry has defined me since a young age, but often only secretly. I remained in the poetry closet for a long time. Sometimes I felt about poetry as I often have about knitting or crocheting. Back before I was married, I felt extremely uncool and totally embarrassed to tell new boyfriends that I liked to knit. And, even in my thirties, I remember feeling terribly uncomfortable when I shared with my employer that I wrote poetry, took it seriously, and considered myself a poet.

Nowadays, when I meet new people, I often tell them that I write poetry: It helps to give some context to who I am. But, interestingly, I still say that I am a teacher when asked what I do, even though I hardly taught at all over the past year (I am on the Substitute Teacher List for the local school board, but I did not take many assignments during 2017/8).

In a bold move over the summer, I allowed myself to be introduced to a roomful of people as a “Poet.” I felt proud and . . . I felt honest! It was liberating to really own my passion and openly claim that title for my own. But then . . . a complication . . .

After the introduction, a lady came up to me and expressed how interesting and exciting it was that I was a poet (my ego agreed). Then, she said, “So, a real poet? Like, you’re published and everything?” and my literary aspirations suddenly humbled my poor ego and left it shivering in a corner. I explained that I was not yet published, but that I was working on it. I told her about my chapbook (submitted to a competition) and my manuscript (recently rejected and now in revision). I felt defensive and wished that I could prove that I was worthy of the title “Poet.”

Over the next few days, with our conversation fresh in my mind, I composed a poem especially for the “are-you-a-real-poet?” lady. I gave it to her and invited her (in the nicest possible way) to decide for herself whether or not she thought I was a poet.

After a few more days, she responded with a beautifully encouraging handwritten note. In it, she wrote: “I thank God for people like you, who pursue their dreams, cherish their talents and never give up.”

If I do ever find myself being tickled by doubt again, I will think of her and the kind words that she wrote to me. She told me that things in this world must happen in their own time and that my time had simply not yet arrived . . . but it would, and in the meantime I must have faith. Her words were passionate and heartfelt, and there was power in them. Kind words from a stranger can sometimes make all the difference to a person. She has given me such a precious gift; the poem I wrote for her hardly seems worthy. Nevertheless, I share it here in honour of her. 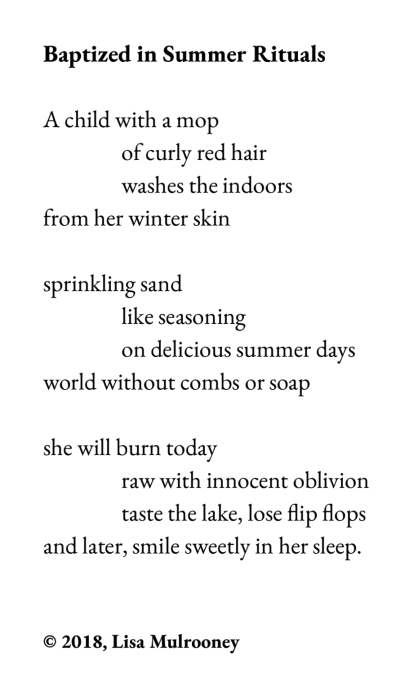 3 thoughts on ““Coming Out” as a Poet, and the Response of a Stranger”